An inflatable is an object that can be inflated with a gas, usually with air, but hydrogen, helium and nitrogen are also used. One of several advantages of an inflatable is that it can be stored in a small space when not inflated, since inflatables depend on the presence of a gas to maintain their size and shape. Function fulfillment per mass used compared with non-inflatable strategies is a key advantage. Stadium cushions, impact guards, vehicle wheel inner tubes, and emergency air bags employ the inflatable principle. Inflation occurs through several strategies: pumps, ram-air, billowing, and suction. 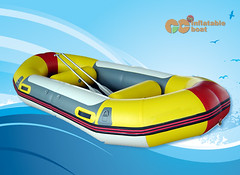 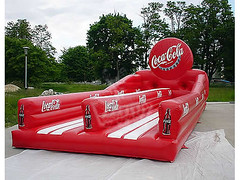 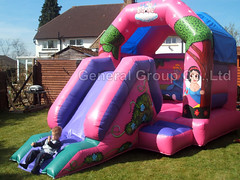 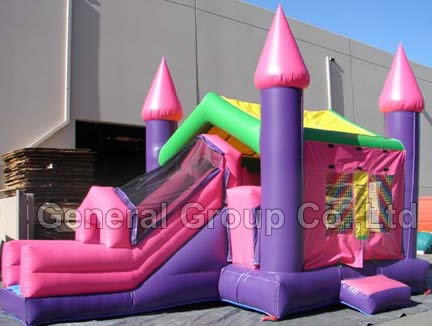 Examples
Typical examples of an inflatable include the inflatable boat, the balloon, the airship, furniture, kites, and numerous air-filled swimming pool toys. Air beams as as structural elements are finding increasing applications. Balloons are inflatables.

Smaller-scale inflatables (such as pool toys) generally consist of one or more “air chambers”, which are hollow enclosures bound by a soft and flexible airtight material (such as vinyl), which a gas can enter into or leave from through valves (usually one on each air chamber). The design dependence upon an enclosed pocket of gas leads to a need for a very durable surface material and/or ease of repair of tears and holes on the material, since a puncture or tear will result in the escape of the gas inside (a leak) and the deflation of the inflatable, which depends on the gas’s pressure to hold its form. Detectable leaks can be caused by holes (from punctures or tears) on the material, the separating of seams, the separating of valve parts, or an improperly shut or improperly closing valve. Even if an inflatable possesses no macroscopic leaks, the gas inside will usually diffuse out of the inflatable, albeit at a much slower rate, until equilibrium is reached with the pressure outside the inflatable.

Many inflatables are made of material that does not stretch upon inflation; a notable exception of this is the balloon, whose rubber stretches greatly when inflated.

The airship is usually inflated with helium as it is lighter than air and does not burn unlike hydrogen airships such as the Hindenburg.

Inflatables are also used for the construction of specific sports pitches, military quick-assembly tents, camping tent air beams, and noise makers. Inflatable aircraft including the Goodyear Inflatoplane have been used. Inflation by dynamic ram-air is providing wings for hang gliding and paragliding.

Inflatables came very much into the public eye as architectural and domestic object when synthetic materials became commonplace. Iconic structures like the US Pavillion at the 1970 Osaka Expo by Davis and Brody and Victor Lundy’s travelling pavillion for the Atomic Energy Commission popularized the idea that inflatables can be a way to build large structures with very extendend interior spans without pillars. These great hopes for inflatable structures would later be dashed by the many practical difficulties faced by inflatable buildings, such as climatization, safety, sensitivity to wind and fire proofing that, currently, restrict their use to very specific circumstances.

The DVD Ant Farm has directions for making your own inflatables, using plastic bags and an iron. The low technological barrier to building inflatables is further lowered by DIY instruction sets like the Inflatocookbook.

A patent was granted in Australia in 2001 for a “Manually portable and inflatable automobile” (Australian Patent Number 2001100029), however no known practical form of this type of inflatable has yet been commercialised.

Large scale low-pressure inflatables are often seen at festivals as decorations or inflatable games. These are made out of rip stop nylon and have a constant flow of air from a blower inflating them.

In some cases, an inflatable roof is added to an otherwise traditional structure: the biggest example in the world is currently the BC Place Stadium in Vancouver, British Columbia. Another example can be found in the Roman amphitheater of Nîmes. 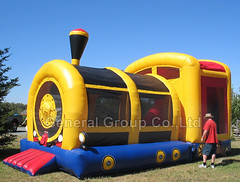 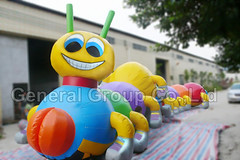 There are also several variations on sports games which are made portable thanks to inflatables. A sports cage is an inflatable cage that holds up a backdrop that resembles a sport (e.g. baseball, American football, soccer, golf) in which you throw, toss, hit or kick a ball at a marked spot on the backdrop. The cage not only holds the backdrop but keeps balls from flying everywhere. Some sports cages come with a radar gun that will tell you the speed of your throw or kick.